Does Hemp Have THC In It? 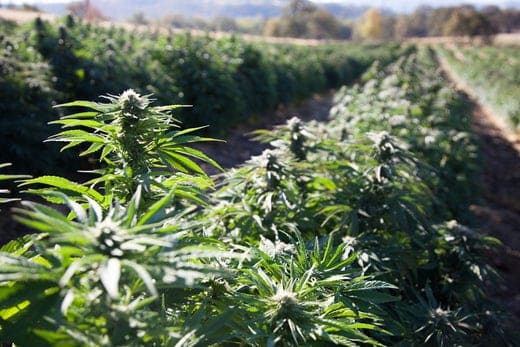 Hemp. Marijuana. THC. Cannabis. Sativa. Indica. All these terms may be confusing for first-timers to the cannabis world. No doubt you’ve heard of (or experienced) the psychoactive high of marijuana. But how does marijuana differ from hemp?

More importantly, does hemp have THC in it, the ingredient that produces a high? In this article, we will go through these terms, figure out what has THC and what doesn’t. This way you can know what to expect from your hemp products.

So, Does Hemp Have THC In It?

Yes, it does. However, there are only trace amounts of THC found in hemp. Having less THC is what distinguishes hemp from marijuana. Both are forms of cannabis with many of the same compounds in them, just in varying amounts. Let’s explore these differences.

Varieties of cannabis plants have been selectively bred for thousands of years depending on the use of cannabis.

Some of these cannabis plants were purposefully bred for medicinal and psychoactive benefits. These varieties are now known as marijuana, their buds having THC levels typically averaging around 16%.

These plants are mostly illegal in the US for recreational use due to their high THC content. Many states offer medical marijuana, however.

Other taller skinnier varieties of cannabis were used for the fiber or seeds to make many things like:

These are now known as industrial hemp and have low THC levels. Today these plants are being bred for their high CBD content and thus are used for CBD products. Many people enjoy these products because they are said to have a lot of health and wellness benefits, without the THC side effects.

Hemp has 0.3% THC or less, while marijuana has more than 0.3% THC. Since THC is what gives cannabis its psychoactive effects, this explains why you can get high from marijuana and not from hemp. Hemp won’t have these intoxicating effects since there are only trace amounts of THC.

The 0.3 percent THC rule also determines the legality of the plant. Due to the Farm Bill of 2018, hemp was taken off the Schedule I list from the Drug Enforcement Agency (DEA) and Food and Drug Administration’s (FDA) Controlled Substances Act. Under this legislation, hemp and hemp derivatives are considered federally legal as long as they have  0.3% THC or less.

Both hemp and marijuana are part of the cannabis species. Typically cannabis is split into the subspecies Cannabis sativa L. or Cannabis indica. Sativa is said to be more energetic or uplifting, while indica is said to be more relaxing or sedative. These two varieties are used as a basis for describing different strains, even though categorization has been debunked by scientists.

It is the strain’s chemical composition that makes up the differences between whether cannabis will make you feel energetic, uplifting, relaxing, or sedative.

So now that we have sifted through the various definitions of things, let’s talk about THC. What is it exactly, and how does it cause a high?

Delta-9 Tetrahydrocannabinol, or THC, is the most well-known and common cannabinoid found in psychoactive cannabis. It is found in high amounts in marijuana and low amounts of hemp. THC is one of at least 113 cannabinoids found in cannabis.

THC is similar to the natural chemical anandamide in structure, which is produced in the brain and is an agonist of cannabinoid receptors in the endocannabinoid system. THC binds to receptors and is then able to change normal brain communication. In this way THC will affect things like:

Where is THC Found In Hemp?

Hemp is made up of stalks, seeds, leaves, and flowers. Where exactly is THC found?

Both THC and CBD can be found throughout the sugar and fan leaves of the plant, but are mostly concentrated in the trichomes of the flowers. Trichomes are small resin glands resembling tiny hairs that coat the flowers. These glands are produced when the plant has entered its flowering stage of the growth cycle, to deter pests and herbivores.

Trichomes contain a higher concentration of cannabinoids, terpenes, and flavonoids than any other part of the plant. In marijuana, the trichomes of the female plant have high THC levels. Hemp has far fewer resinous trichomes.

You may be surprised to find out that THC is not only found in this form. It can go through many processes to transform into different compounds. These compounds are also present in the hemp plant (and even in our stomach). We will now introduce you to some of these forms of THC.

Delta-8 THC is another form of THC that has a less psychoactive effect. It is present in both hemp and cannabis in trace amounts, typically about 1%.

Delta-8 THC is an aged form of Delta-9, thus the similar effects. When Delta-9 starts aging, the double bond moves to the eight carbon, turning it into Delta-8 THC. Scientists call it a degraded form of THC because it is produced as D9 ages. Delta-8 is not considered part of the total THC calculated. Learn more about the differences between Delta-8 and Delta-9 THC.

The majority of THC in cannabis is in the form of tetrahydrocannabinol acid (THCA). THCA can convert to THC as the plant ages, dries, or gets exposed to extreme conditions in the environment. Growers need to check the THCA levels of their crops before they are harvested to be aware of how much THC will contribute to their final amount.

The Farm Bill mandated that both THC and THCA should be counted when a plant falls under the 0.3% THC requirement. The “total THC” means both THC and THCA, and this is properly calculated as THC + (THCA x 0.877).

The reason for this, rather than adding the two amounts together is because of decarboxylation, the process where heat, time, or both convert THCA to THC. The number 0.877 is used because it is the percentage of THCA that remains after decarboxylation. The result is the maximum amount of THC that could be found in the plant measured by dry weight.

This is a potent, metabolized form of THC that your body creates after consuming marijuana edibles. Since it is THC in a different form, it can make the edibles seem strong even if you smoke marijuana regularly. This is because when you digest THC through the liver, these metabolites can cause an increase in possible psychoactive effects.

And even though this has become popular in the marijuana community, it is now picking up in the hemp community. Though CBD edibles will not have this effect since they don’t have much THC, Delta-8 THC edibles can form these metabolites once consumed. This means upon consuming a Delta-8 edible, you may experience effects 10 times more powerful than Delta-8.

Other Contents of Hemp

So what is hemp made up of besides THC and its variants? Here is a list of common cannabinoids, flavonoids, and terpenes that can be found in the hemp plant:

Can Hemp Get You High?

The million-dollar question everyone wants to know: Since hemp contains THC, can it get you high?

Hemp features THC only in trace amounts, so it is unlikely you will experience a high when smoking hemp. The plant is typically high in CBD, meaning you are more likely to experience non-psychoactive CBD effects.

However, if you purchase a hemp product that is high in Delta-8, you will experience a Delta-8 high. This includes things like Delta-8 vape cartridges, distillates, and dabs. Check out what the Delta-8 high is all about.

So what about other hemp products?

THC and CBD: Better Together

Studies suggest that THC and CBD work better together. For this reason, it is a good idea to buy a full-spectrum CBD product, rather than a distillate or isolate of a single cannabinoid. This is due to the entourage effect.

The entourage effect is the theory that all the compounds in cannabis work together, and when they are taken together, they produce a stronger effect than when taken individually. The phytocannabinoids and terpenes work together to create a synergistic effect that mimics nature. So if you have the chance to take a full-spectrum product, go for it!

In this article, you’ve learned that hemp has THC in it, though only in trace amounts compared to marijuana. You’ve learned about varying forms of THC and all the other beneficial contents of the hemp plant. And you’ve learned that consuming hemp is unlikely to produce a high unless of course, you’re experiencing hemp-derived Delta-8 (wink).